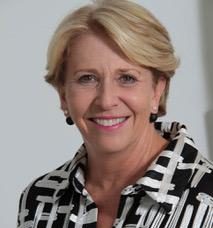 Margo was President of Swiss Re Brasil Resseguros and Managing Director of Latin America South having joined Swiss Re in 2012.  She was also a member of the Americas Management Team.

Margo joined Swiss Re from Willis, where she was President of the reinsurance operation in Brazil for over four years.

A British citizen (Scottish), but brought up in Mexico and Nicaragua, she has over 40 years of industry experience working for reinsurers, reinsurance broking firms and insurance companies across various geographies.   She has been involved in many territories including the UK, Ireland, Iceland, Japan, the Caribbean, North America and, of course, all the countries in Latin America – from Mexico down to Argentina and Chile.

Margo, in addition to Swiss Re, has worked for reinsurers such as Munich Re (Deputy Managing Director) and SCOR (President) as well as the broking firms Willis (CEO), JLT (COO) and Sedgwick (Executive Director).  Additionally, Margo’s client perspectives were further enhanced by a two-year stint as Executive Director of Allianz in Brazil.  She is fluent in English, Portuguese and Spanish, speaks good German and French and has relatively good Italian.

She has been pursuing a number of her interests which include promoting diversity and inclusion in the insurance industry in Brazil (with ambitions of expanding this to other Latin American countries).  Consequently, in August 2018, she helped found and took on the presidency of the newly founded AMMS (Association for Women in the Insurance Market in Brazil) which has now been rebranded to Sou Segura.  Although she is no longer president, she continues to be on the Committee of Sou Segura.

Additionally, Margo is a non executive director of Austral Holdings (a Brazilian insurance and reinsurance Group) and has recently taken on a consultancy role with HFW, a prestigious UK law firm with interests in Brazil and Latin America.